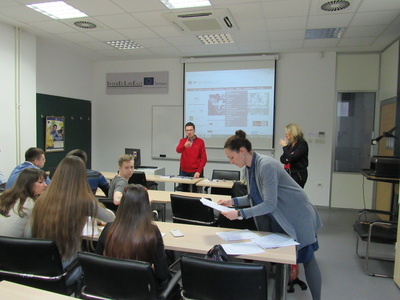 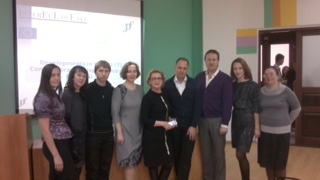 On 15th and 16th February 2016 Professor Rajko Knez, Faculty of Law of University of Maribor gave two lectures – Developments in the EU and Contemporary jurisprudence of the Court EU – during his visit as guest lecturer at Institute of State and Law, Tyumen State University, Western Siberia, Russia.
Visit took place as part of tasks within Tempus Project InterEULawEast 544117, in particular, within WP.2.
Thanks to great support and logistics of our Tyumen colleagues – Professor Sergei Marochkin, Prof. Svetlana Racheva and Professor Irina Mylnikova – around 100 students and teachers attended the lectures.
After the lectures, Professor Knez gave answers to student’s questions and a vivid discussion took place concerning current issues of EU integrations and perspectives. We would like to thank to Professor Knez and our Tyumen team for their engagement due to which one more task within WP. 1. has been accomplished!

Part of the atmosphere can be seen on the video below. More on Professor Knez’s visit and details You can see here. 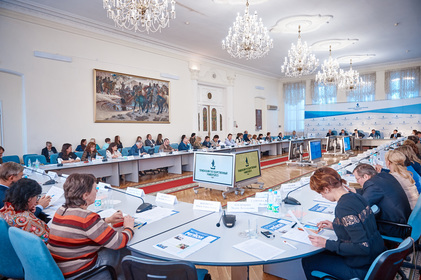 We are proud to inform You that the Master Programme ‘International and European Law’, which has been established within Tempus Project 544117 InterEULawEast, has been launched by the decision of the Academic Council of the Tyumen State University on 29 January 2016. It is the legal decision for the teaching programmes to be opened within the license of the Tyumen State University. To make this decision possible Tyumen TEMPUS team – Professor S. Y. Marochkin, Professor Alexander Yakovlev, Professor Svetlana Racheva, Professor Sergei Romanchuk and Professor Irina Mylnikova  – have been working hard in order to prepare all the necessary curriculum, teaching materials, supplies, etc.

​Next task of our Tyumen colleagues is to hold presentations before the students of our and other institutes of the University. The recruiting campaign is going to start in summer. Congratulations to TSU team and the whole consortium!

We are pleased to announce the 3rd International Conference within the series “Legal Reform and EU Enlargement – Transfer of Experience” under the Tempus IV Project InterEULawEast, which will be held on March 21 – 23th, 2016 at Faculty of Economics and Business, University of Zagreb, Croatia.
The working title of the Conference “Digital Market Strategy: Legal, Economic and Educational Perspectives” is in line with current developments in the Single Market – Digital Single Market Strategy (digital contracts, improving access to digital goods and services, digitalisation of business registers, data protection, online sales, digital economy, digitalisation in context of national laws of Partner Countries, eHealth, e-government etc.).

The idea of the Conference is to have presentations of staff members in the morning session and presentation of students on mobility scheme in the afternoon session. The presentation of the students will be evaluated and taken into concern for the final grade.
The best student papers will be published in special issue of our Journal, together with best papers of the Conference attendees.
The Programme of the Conference will be published here.
Together with the Conference the consortium will organise the 5th Project Coordination Meeting. Detailed meeting agenda will be available here.
For any further information please refer to hhorak@efzg.hr and/or kpoljanec@efzg.hr
We are looking forward to Your attendance and valuable contributions!”

Advanced Course in European Company Law took place on 5th to 8th November 2015 in Tempus Centre at National University „Odessa Law Academy“. Advanced Course consisted of numerous lectures given by European and domestic legal experts, during which the attendees from Ukraine, Russia and the EU had opportunity to pose questions and to give their remarks. The aim of this Advanced Course was to introduce young researchers and teachers working at the co-beneficiaries in Partner Countries to current challenges in European Company Law – freedom of establishment, abuse of right to register company by third countries’ nationals, history of European economic integrations through centuries, supranational company forms, free movement of capital and new initiative called Capital Markets Union.

Domestic lecturers also gave their overview of management of company’s assets at Ukrainian financial markets, challenges and prospects of Ukrainian path to the EU as well as domestic competition law issues in light of EU law.

The course was an opportunity to meet President of the National University „Odessa Law Academy“ Sergei Kivalov and Rector Professor Volodymyr Zavalnuk, to sign into The  Book of Guests and press conference. During the meeting with University administration, Project Coordinator had a chance to discuss current issues and challenges of Ukrainian HE system and prospects of future collaboration between co-beneficiaries within the Project. Advanced Course ended with solemn ceremony at which the Certificates of Attendance were delivered to each attendee. 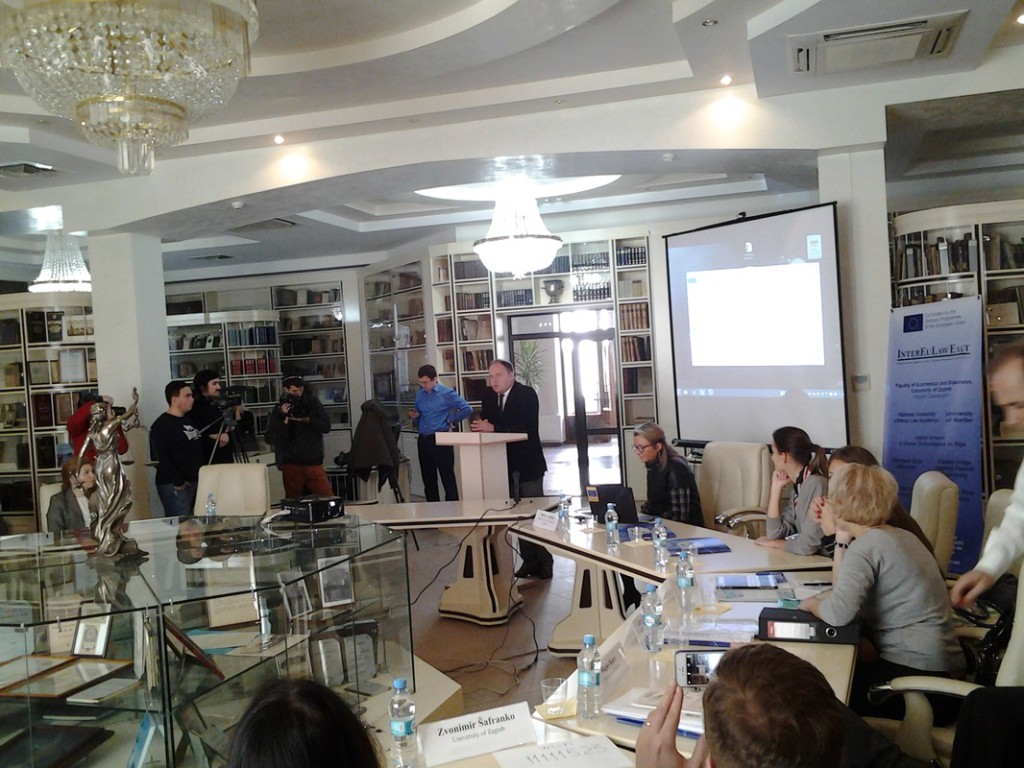 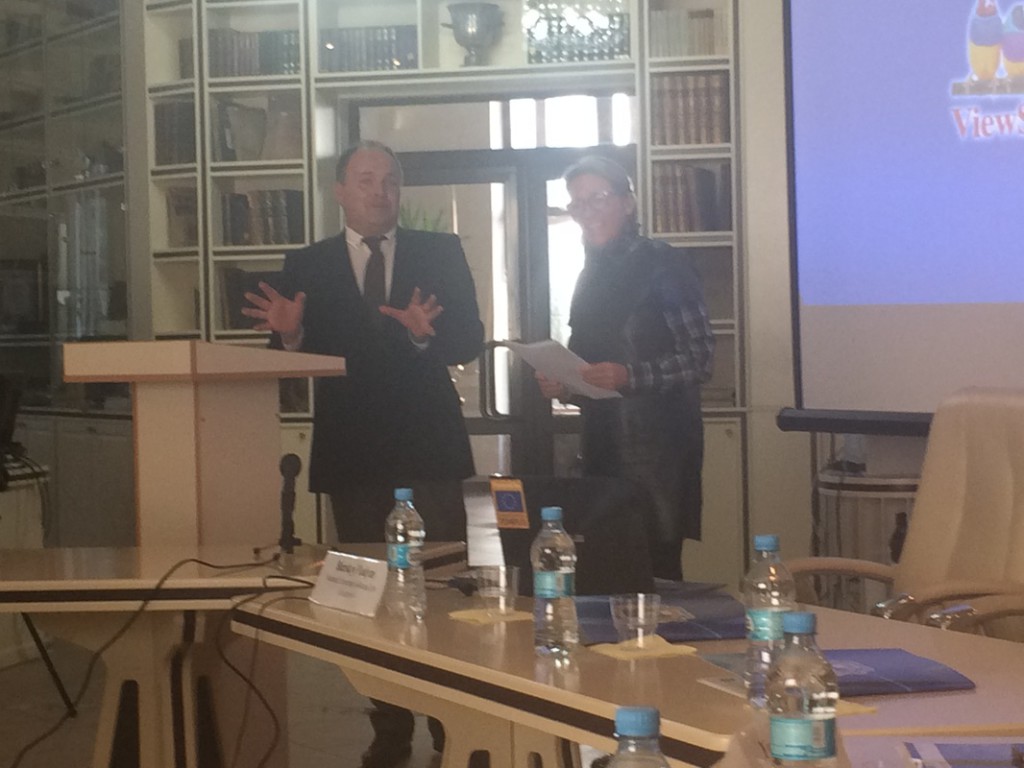 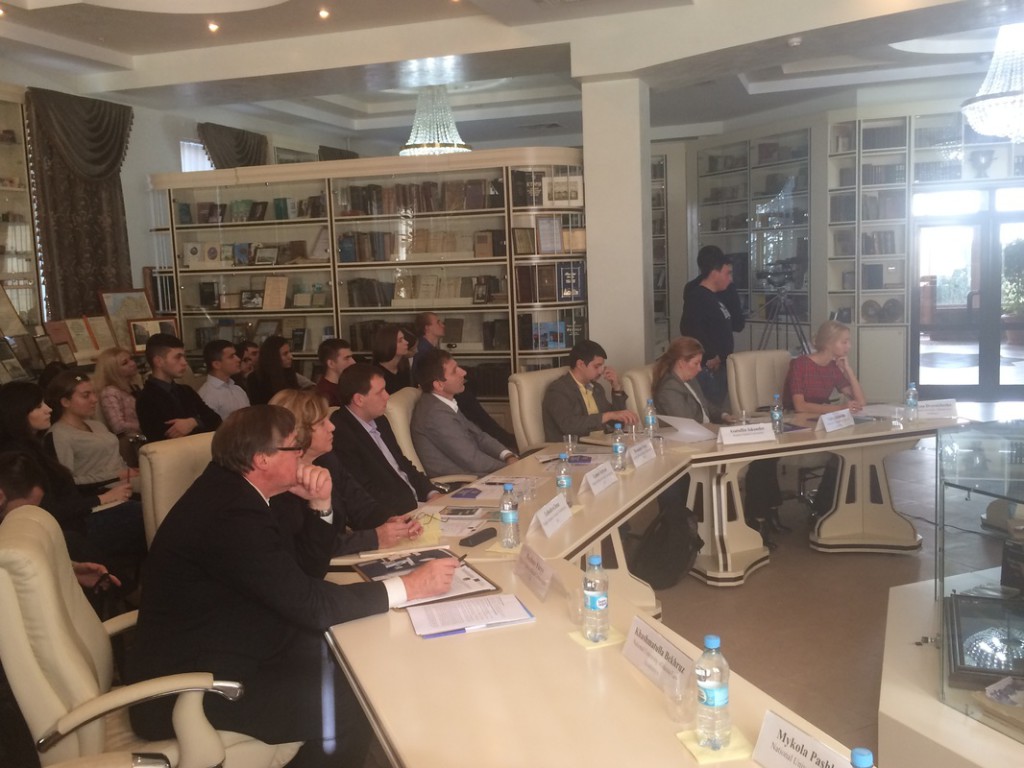 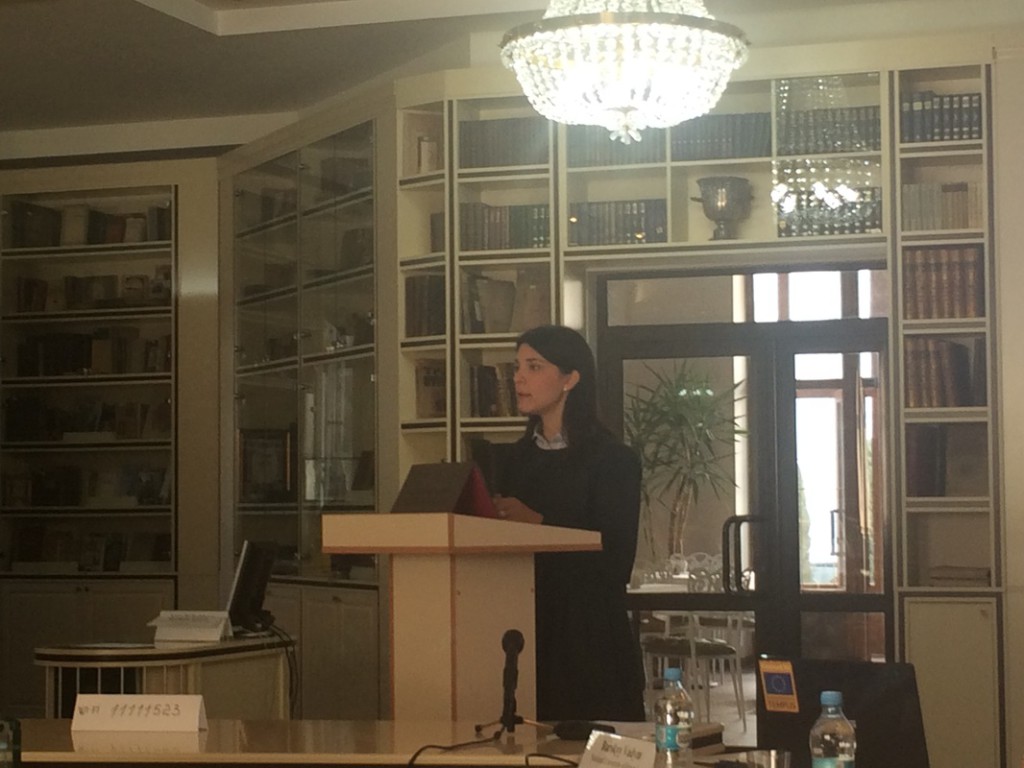 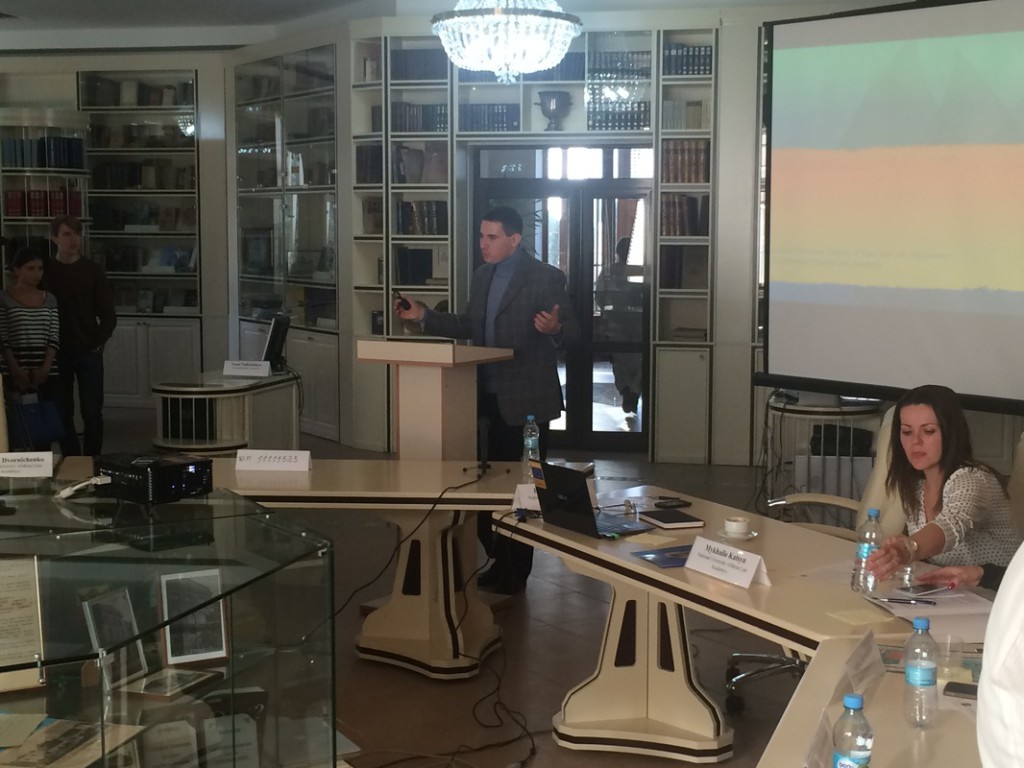 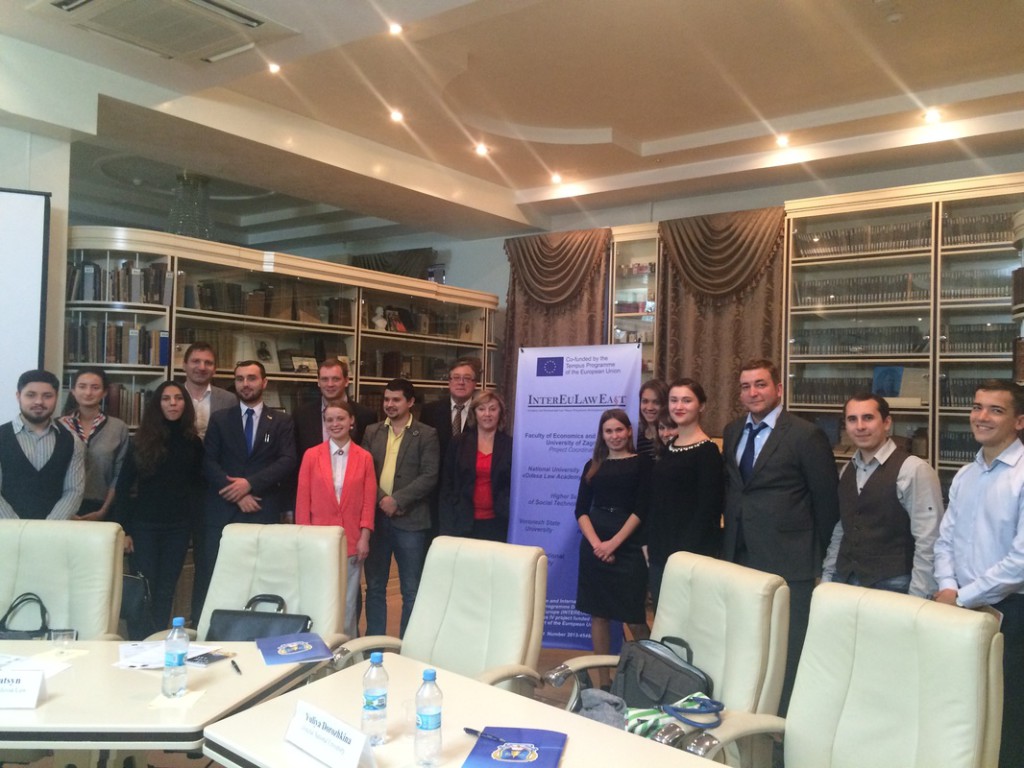 On 5th November 2015 monitoring visit took place at National University “Odessa Law Academy”. Professor Hana Horak, Coordinator of Tempus project 544117 InterEULawEast and her team, in presence of local representatives of Tempus Project – Vice-Rector for International Cooperation Professor Vyacheslav Tulyakov, Head of Department for International Relations Associate Professor Vadym Barskyy and Professor Olga Turchenko, Donetsk National University, Vinnitsa – held a meeting in Tempus Centre with Mrs Olena Orzhel and Mrs Ivanna Atamanchuk, Project officers from National Erasmus+ Office Ukraine. Professor Horak gave introductory presentation of Project’s tasks and objectives and informed on organisational and financial aspects of implementation of the Project. Professor Horak emphasized that the Project has been executed according to the updated Workplan, it is flexible to external factors and that all issues of its implementation are being dealt with in permanent communication with the EACEA and other co-beneficiaries. National University “Odessa Law Academy” team introduced Mrs Orzhel to internal procedures of project implementation, in particular, with development of master programme, role of Tempus centre, preparation of Legal Glossary, competition procedures for scholarship mechanism. Local representatives also presented relevant supporting legal documents concerning overall project implementation. In the second part of the monitoring, project officers held several interviews with local students concerning student awareness of relevance of Tempus Project and prospects of student mobility within Tempus Project and other EU funded projects. In the end, Mrs Orzhel thanked the members of both teams for all efforts they have made so far in order to implement the Project and gave valuable recommendations for further implementation of the Project. 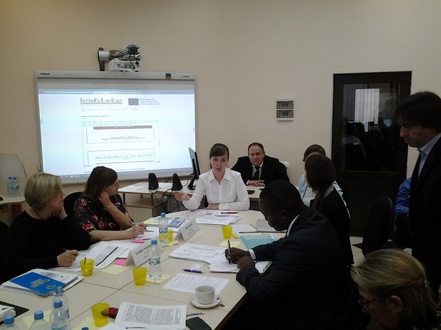 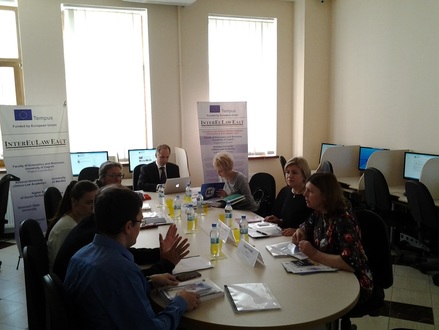 The presentation of master program “International and European Law” took place on 23rd of September 2015. at the Kazan Federal University.

Roustem Davletguildeev and Gulnara Shaikhutdinova presented to students of law faculty new master program «European and International law». The new program became a result of a successful cooperation between higher educational facilities from European Union, Ukraine and Russia – participants of Tempus IV Project 544117-TEMPUS-1-2013-1-HR-TEMPUS-JPCR InterEULawEast, as prof. Davletguildeev noted in his welcome speech.
Prof. Davletguildeev emphasized attention on general learning outcomes of the new master program, it advantages and perspectives for students who will attend it.

Prof. Shaikhutdinova stated that international nature of disciplines taught in the framework within the master program «European and International law» is the main advantage which may open the mind and make students more competitive on labor market.

The presentation attracted more than two hundred students all over the Kazan Federal University as well as from other universities of the city of Kazan. 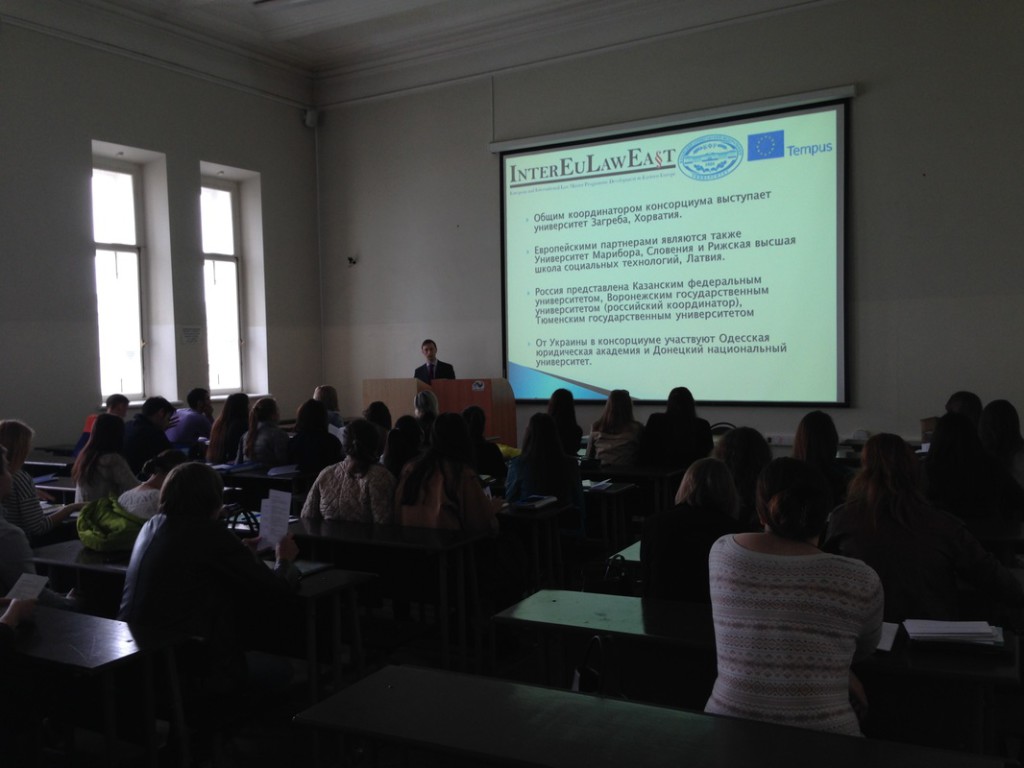 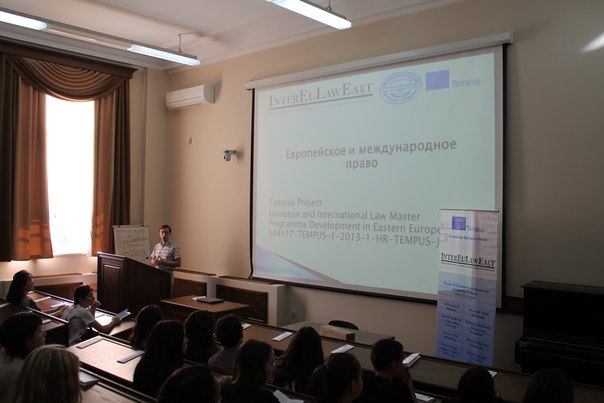 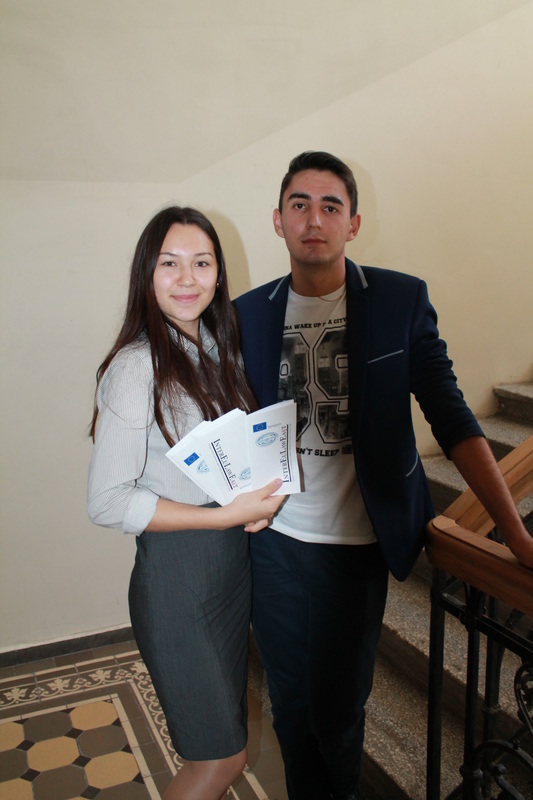 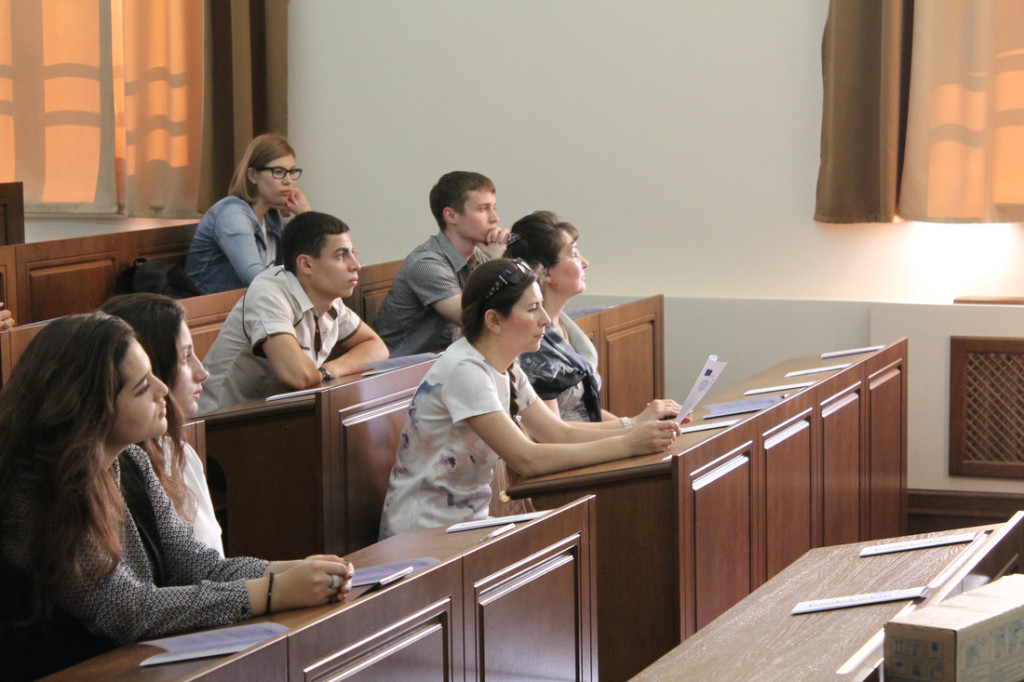 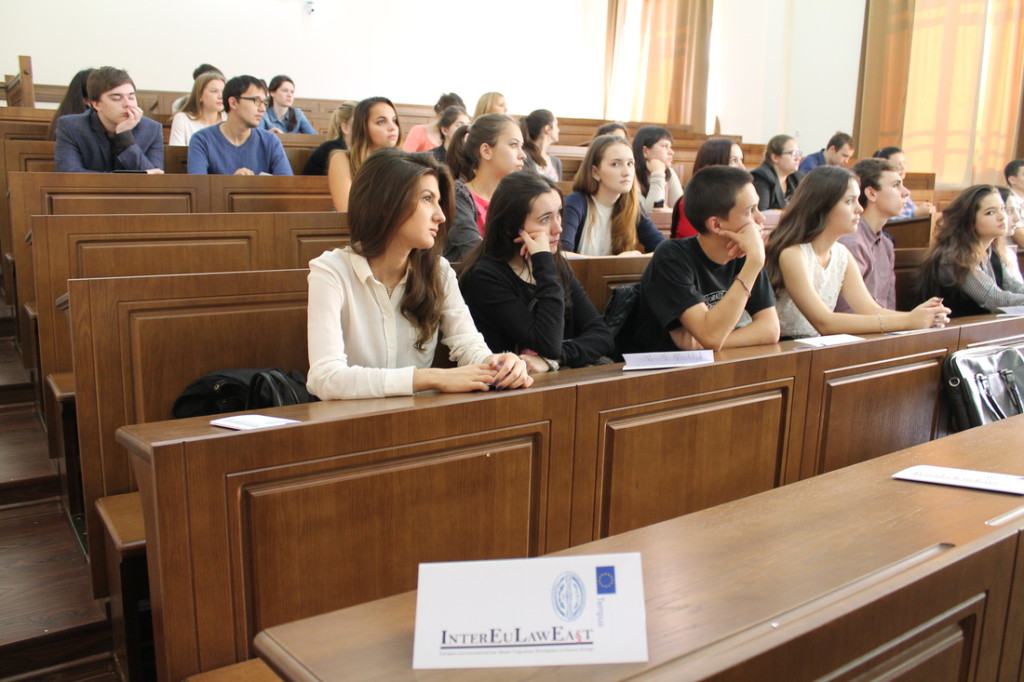 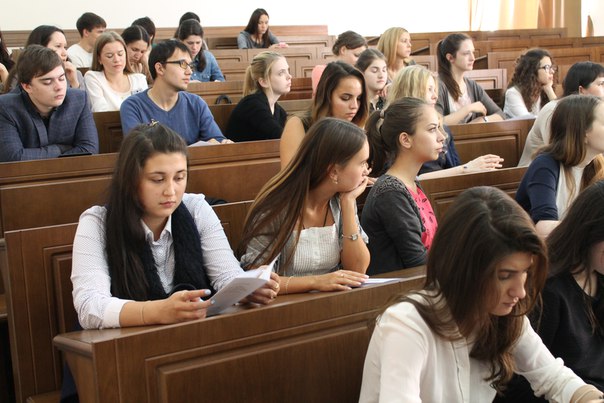 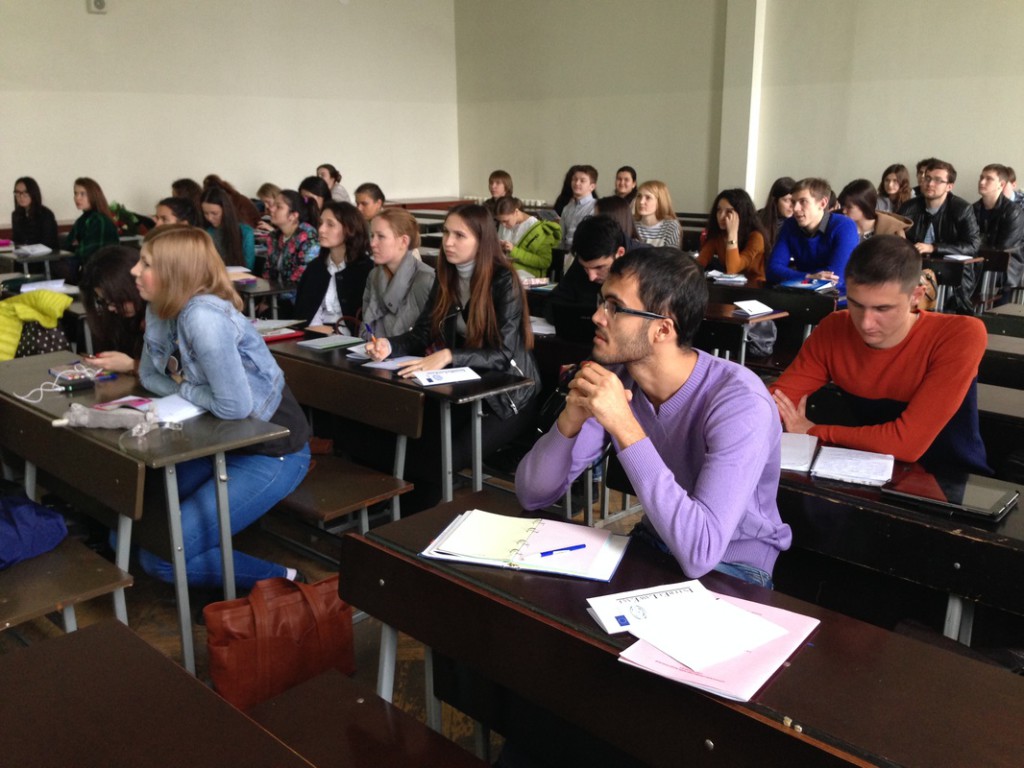 VK
Facebook
Twitter
Google+
On the 1st of September there was conducted a ceremony of awarding of students ID cards to students enrolled for our Master’s Program “International and European Law”. In total twelve students will study on the Master’s Program. Professor Pavel Biriukov greeted the students with the welcome speech. He stressed the importance of such specialists as future graduates of the Program for Russia and development of its international relations. Professor Biriukov wished the students success and good study. 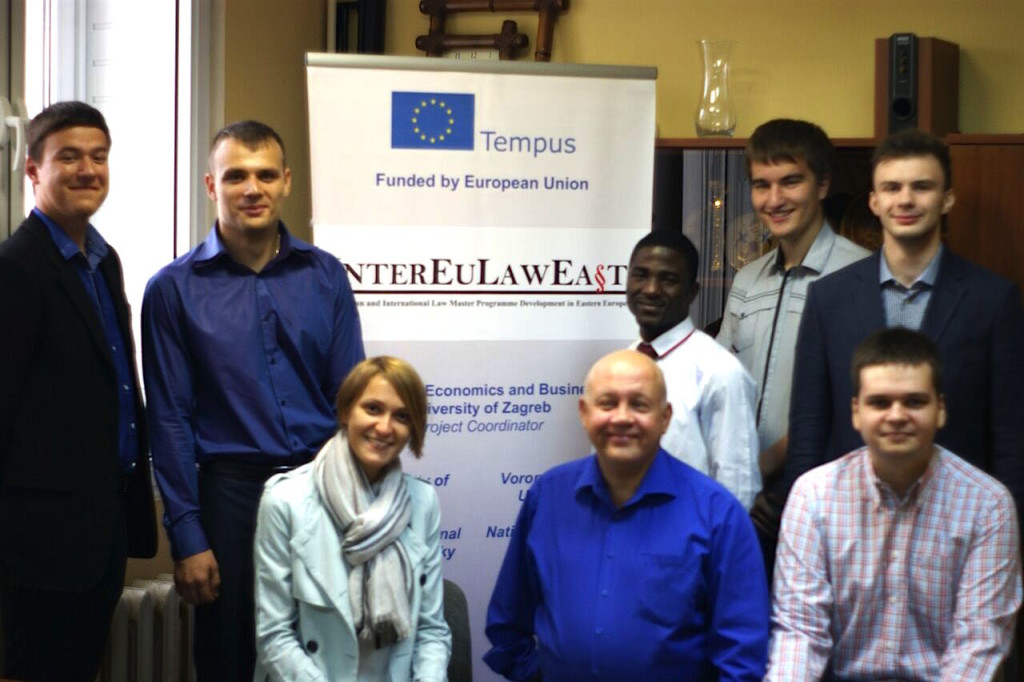 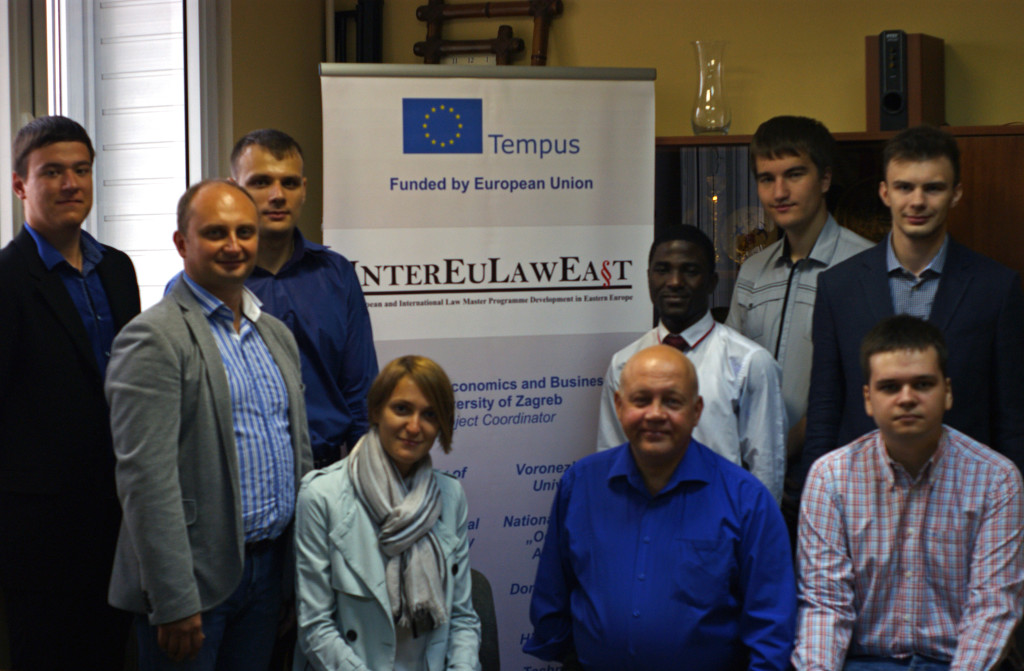 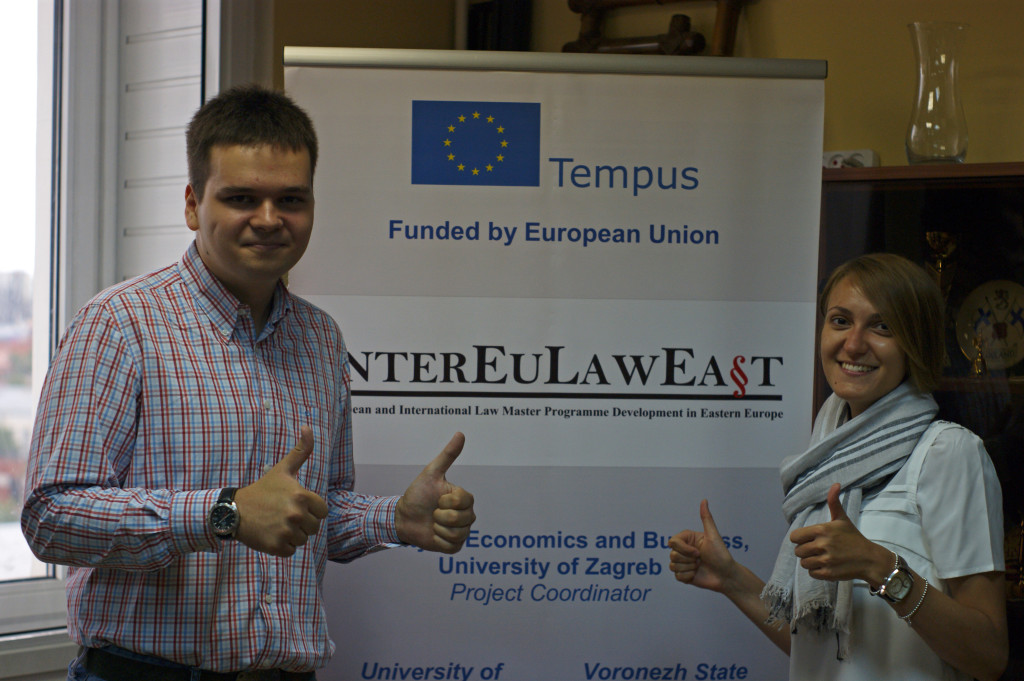 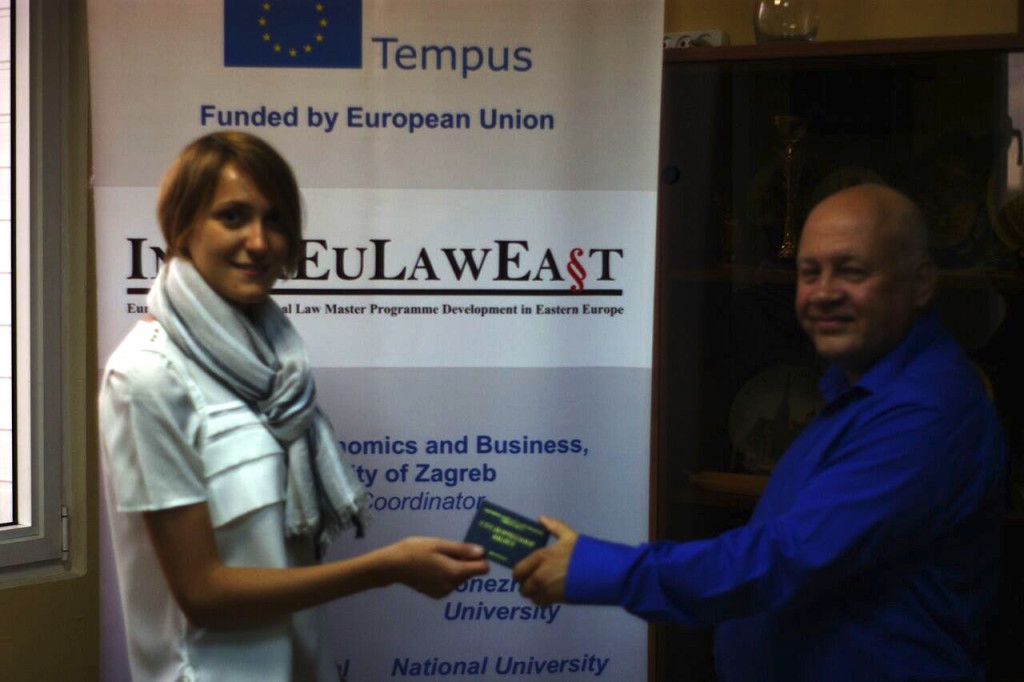 Presentation of InterEULaw East Project and meeting on monitoring results, 12th May 2015

On 12th May 2015 Prof Horak presented InterEULawEast Project within International Forum “Educational and cultural area of the Commonwealth of Independent States: development vectors”, which took place on 12-14th May 2015 at Voronezh State University, Russian Federation. Forum gathered numerous participants from Russian Federation, EU, Ukraine and former USSR countries.  Prof Horak pointed out main aims and objectives, relevant facts on the Project implementation and achievements of InterEULawEast Project. After the presentation, Prof Horak replied to several questions on project implementation, which were posed by colleagues from other ongoing projects. The discussion showed interest of wider public as regards implementation of master programme in International and EU law.

In the afternoon hours, Anna Muravieva, National Erasmus Officer, Prof Horak and representatives of other co-beneficiaries participated at discussion on results of monitoring of the Project. Aim of the meeting was to find methods of improving project implementation in line with current needs of Russian high educational system.

On 13th May 2015 well-known expert Dr Declan Kennedy of Cork University, Ireland, gave series of lectures on writing and using learning outcomes. This interactive methodological workshop gathered numerous participants including staff members of InterEULawEast Project. Dr Kennedy pointed out importance of proper writing and using learning outcomes in preparing master programmes. This was a chance for staff of project co-beneficiaries to learn more, aiming at improving current master programme and harmonise it with standards and best practices of Bologna process.

All staff members successfully passed workshops and certificates of attendance were solemnly awarded. 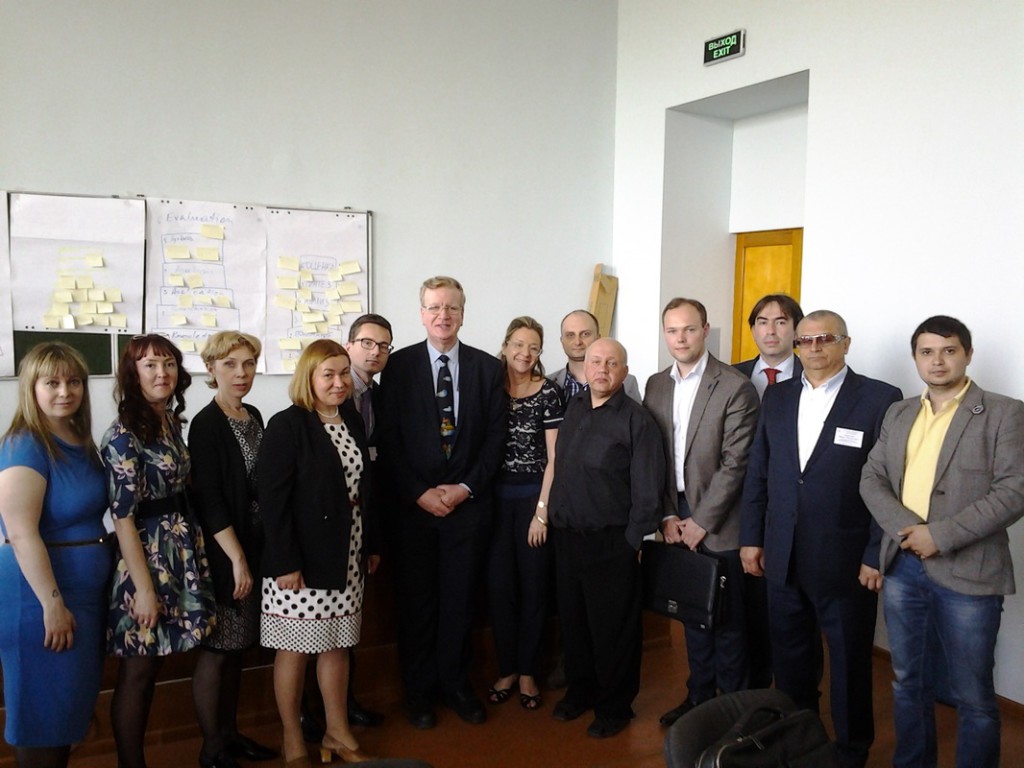 Report and materials for download are available on the following link: 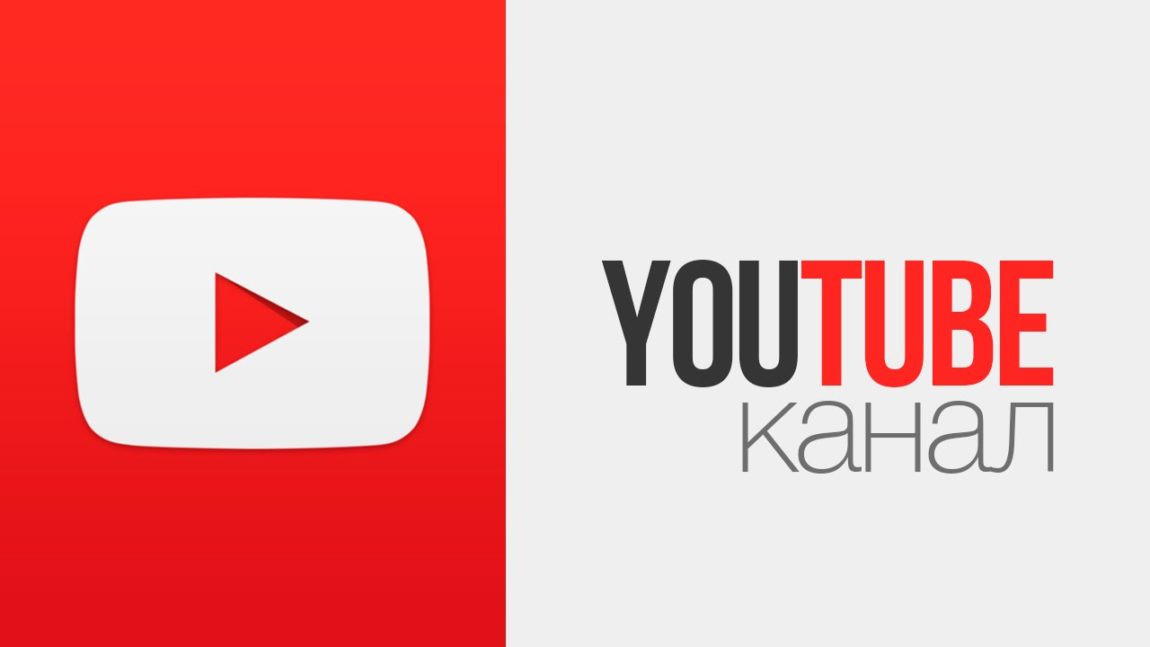 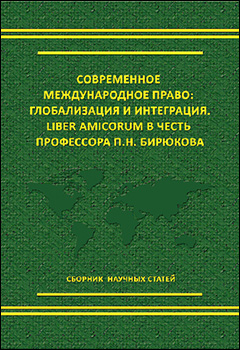